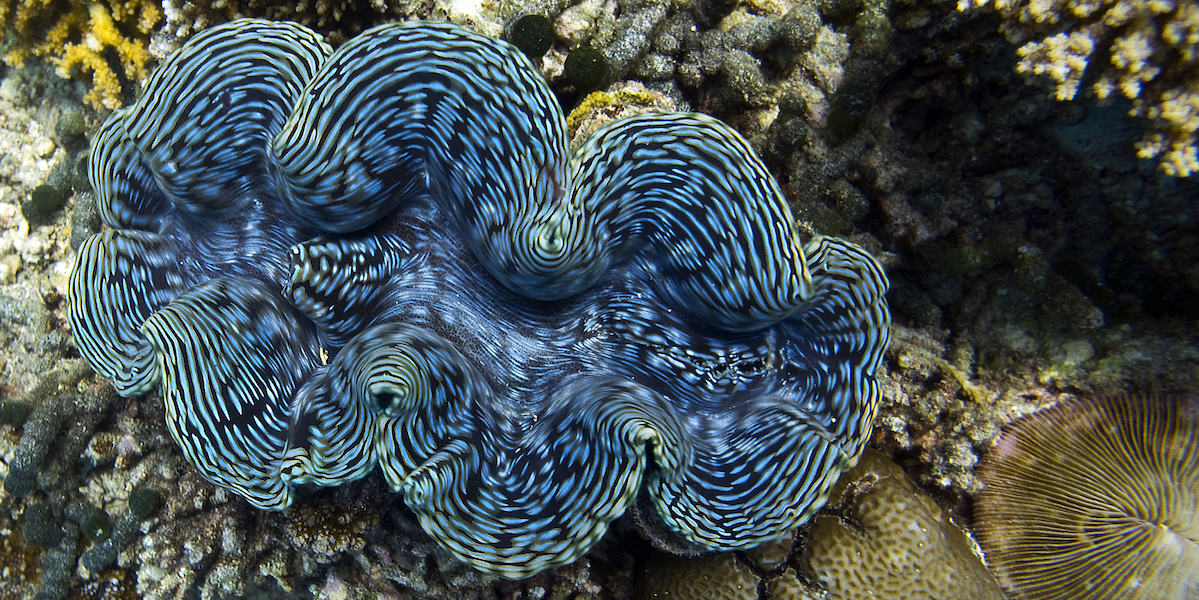 Powering the Future with Giant Clams

In 2014, Shu Yang, of the Materials Science and Engineering, joined School of Arts and Sciences’ biophysicist Alison Sweeney on an unusual quest. Backed by a NSF INSPIRE grant for bold, interdisciplinary research, the duo aimed to unlock the solar-powered secrets of the giant clam. Read more.

Continue reading at The Atlantic.

and related reading at Mimicking Giant Clams to Enhance the Production of Biofuel. 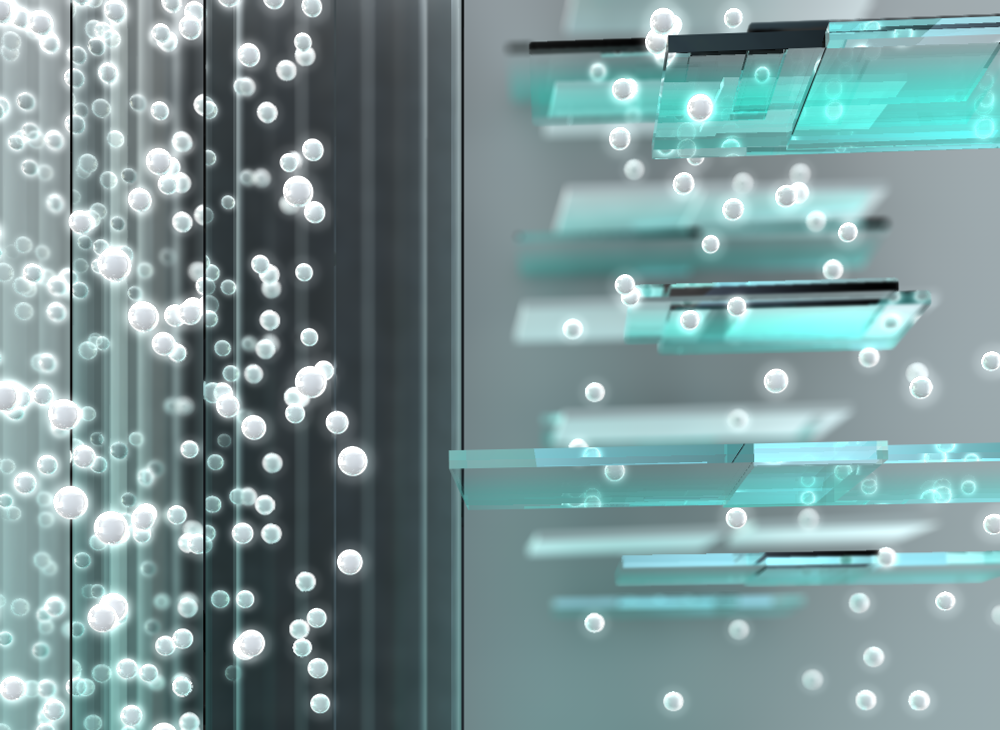 When it comes to cell phones, there are fewer things more frustrating than a short battery life. Researchers at the University of Pennsylvania and Drexel University reported a novel and scalable approach to prepare electrodes from atomic thin 2D nanosheets in the vertical orientation via self-assembly (see publication in Nature). The method marries soft matter assembly and functional hard nanomaterials by creating a coherent and long-range ordered liquid crystal phase of 2D sheets of titanium carbide, Ti3C2, a member of the MXene family. The resulting electrode films show rapid ion diffusion in thick films, retaining almost 100 % of the capacitance after 20,000 cycles of galvanostatic cycling at a rate of 20 A/g, and nearly thickness-independent (up to 200 micrometers, or 0.2 mm). 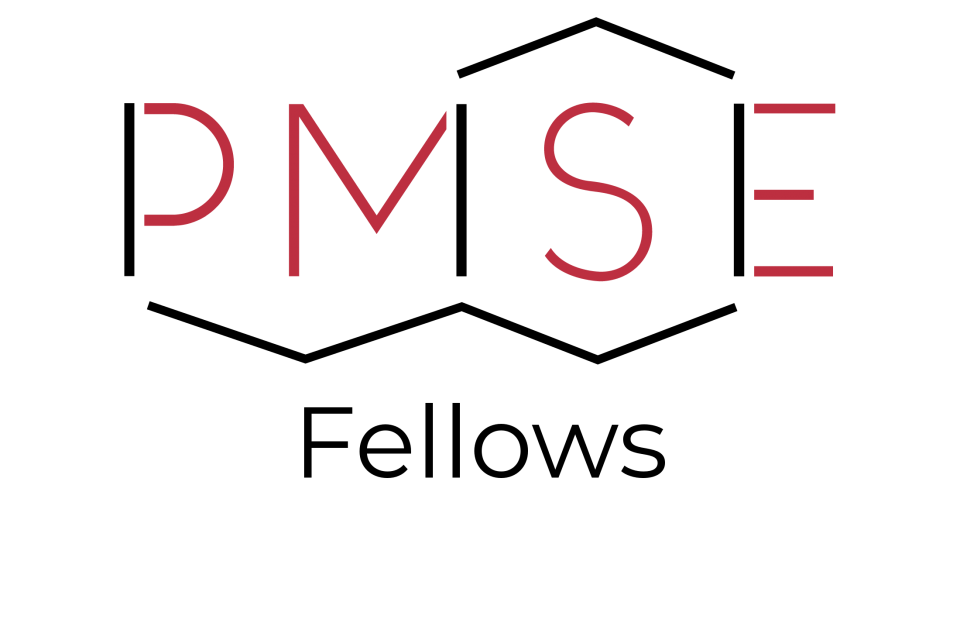 “For dedicated service to the Division of Polymeric Materials: Science & Engineering and pioneering the synthesis and fabrication of responsive nano- and micro structured soft materials”

Shu Yang, Ph.D., Professor of Materials Science and Engineering and Chemical and Biomolecular Engineering, has been admitted as a Fellow of the Royal Society of Chemistry (RSC), a professional society based in the United Kingdom with over 50,000 members worldwide. 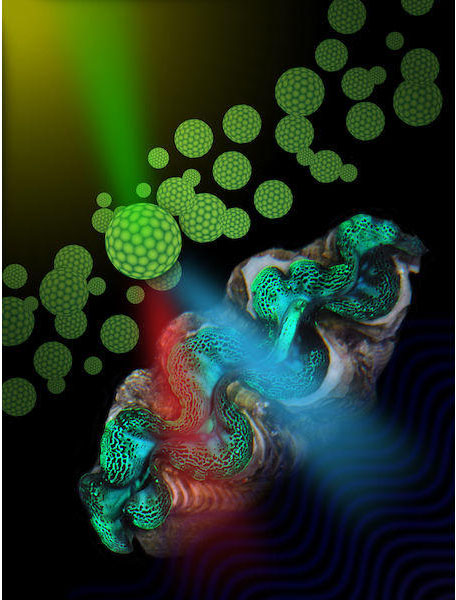 Mimicking Giant Clams to Enhance the Production of Biofuel

Alison Sweeney of the University of Pennsylvania has been studying giant clams. She refer to the clams as “solar transformers” because they are capable of absorbing bright sunlight at a very high rate and scattering it over a large surface area. When the light is distributed evenly among the thick layer of algae living inside the clam, the algae quickly converts the light into energy.Working with Sweeney, the Yang lab devised a method of synthesizing nanoparticles and adding them to an emulsion — a mixture of water, oil, and soapy molecules called surfactants — to form microbeads mimicking the iridocytes, the cells in giant clams responsible for solar transforming. 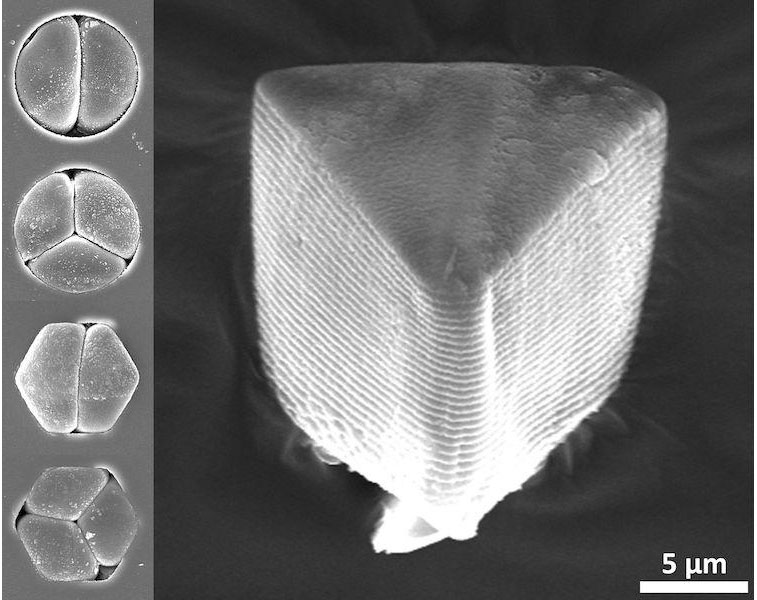 When it comes to taking up room without adding too much weight, the bubble can’t be beat. Because they are mostly air, they’re ultra-lightweight and can expand to fill any given space.

Researchers at the University of Pennsylvania and the Korea Institute of Science and Technology (KIST) found a way to exploit these properties of bubbles to create “microbombs” that expands with heat to form “microclusters,” which fit themselves to fill their physical confinement. When expanding to large volumes and filling spaces, microclusters become extremely lightweight with soft and adaptable boundaries. Using this material, the researchers hope to improve heat and sound insulation, electromagnetic interference shielding and a process called jamming that has been used in robotics and materials design.

Surprising Insights Into the White Spots on Butterfly Wings

A collaboration between biologists and materials scientists at the University of Pennsylvania is yielding new insights into the wings of the “skipper butterfly” in the Costa Rican rainforest. What they learn could lead to technological advancements in systems ranging from power-efficient computer displays to sensors to energy efficient buildings, windows and vehicles.

Colloids are useful models for understanding the structure and behaviour of atoms and molecules. Indeed, colloidal phases are governed by many of the same forces that control the interactions between smaller particles. When colloids are confined within a space, the interactions at play are often not rationalizable simply in terms of free-energy minimization. In cylindrical spaces, colloids form particularly interesting assemblies. 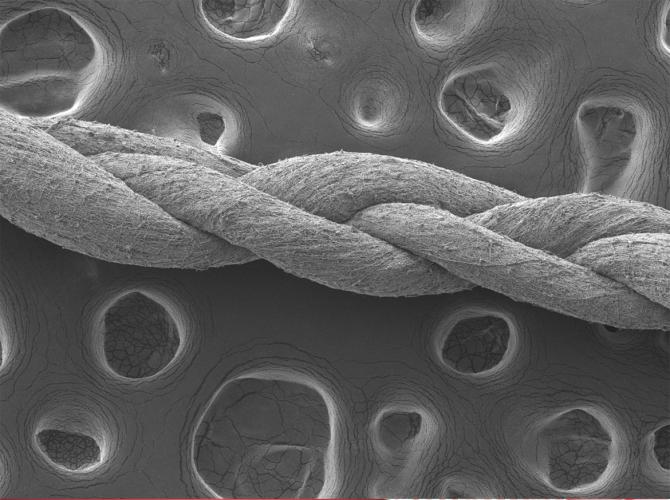 Wearable technology requires materials that are both flexible and functional, so developers often look to polymers or to make harder materials as thin as possible. “So we’re taking inspiration from clothing” to make a new kind of wearable health tracking device that gathers information from its wearer through his or her sweat.

Instead of just wicking sweat away, the team's yarn will be able to chemically analyze its contents and change color accordingly.

The precise link between concussions in sports, especially at the youth level, and traumatic brain injurie by soldiers is still being explored. Unfortunately, unlike a broken bone or a torn ligament, concussions are invisible and tricky to diagnose. The Penn team in collaboration with Gang Feng’s group at Villanova University and Jie Yin’s group at Temple University has developed a polymer-based material that changes colors depending on how hard it is hit. The goal is to someday incorporate this material into protective headgear that could give an early warning sign of a concussion. Youtube. 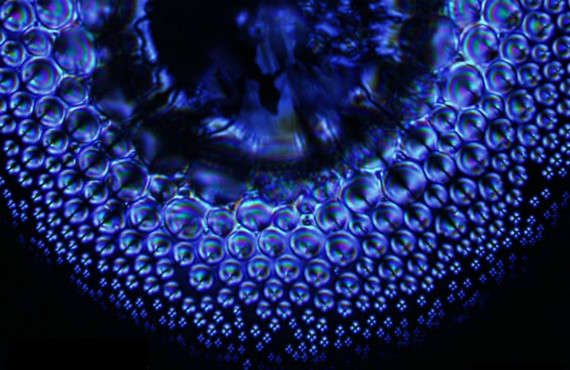 The compound eyes found in insects and some sea creatures are marvels of evolution. There, thousands of lenses work together to provide sophisticated information without the need for a sophisticated brain. Now, engineers and physicists at the University of Pennsylvania have shown how the liquid crystals can be employed to create compound lenses similar to those found in nature. Taking advantage of the geometry in which these liquid crystals like to arrange themselves, the researchers are able to grow compound lenses with controllable sizes. 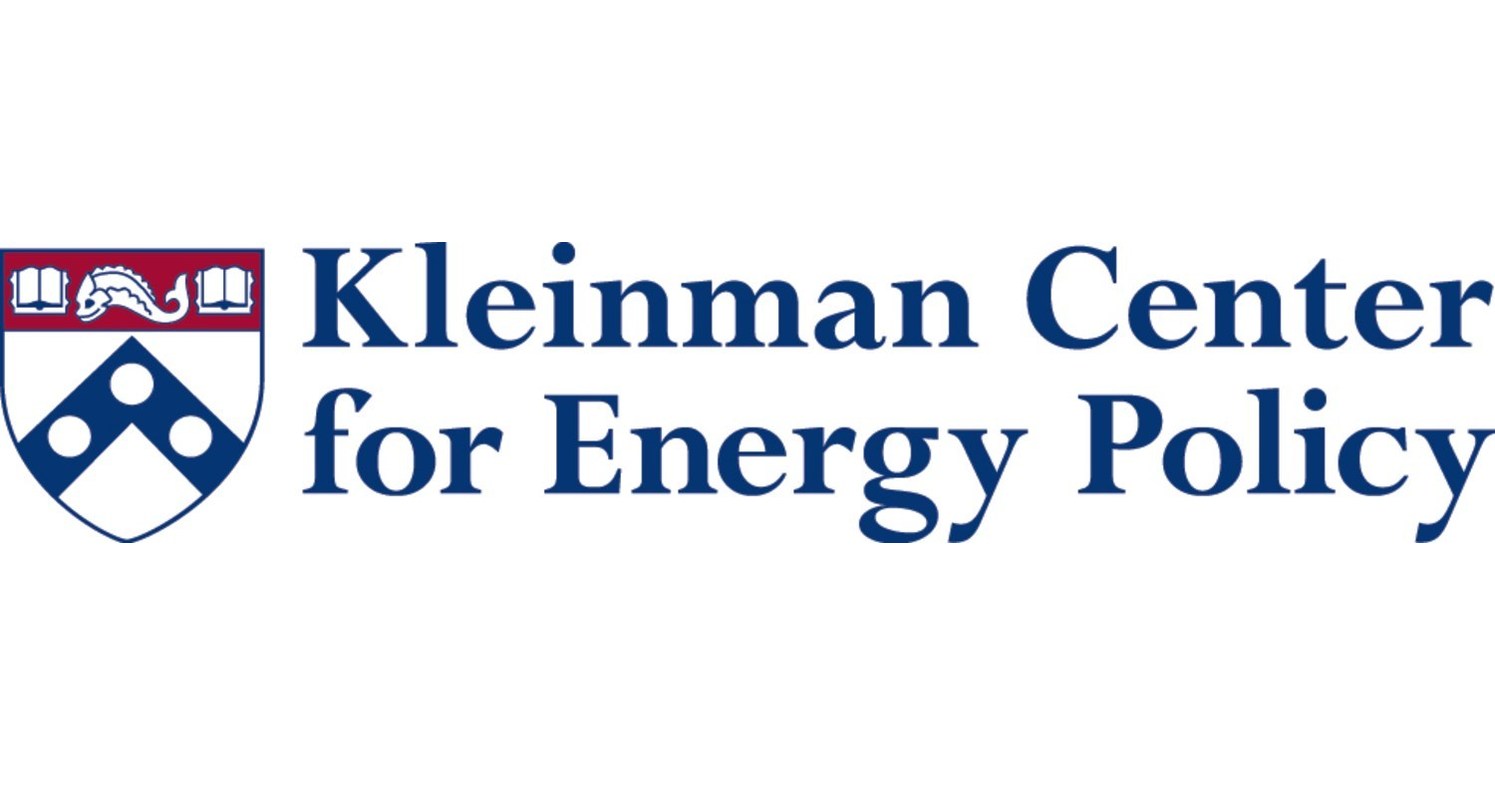 Spotlight on Research: The Smart Window

An Elegant Solution for Improving the Energy Efficiency of Buildings. This is the first in a series of interviews to be conducted by the Kleinman Center for Energy Policy. 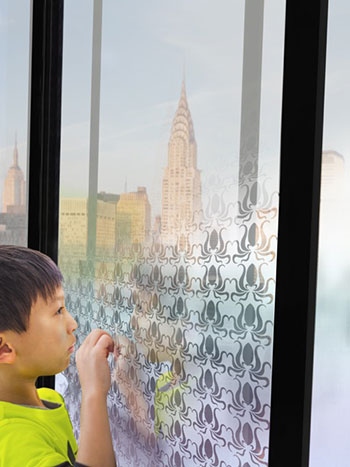 Commonplace as they are, windows are an important piece of technology. Beyond architectural aesthetics, a building’s ecological footprint depends heavily on how its internal light and heat are managed. With this in mind, researchers from around the world are trying to make windows “smarter” by tailoring their properties to be more responsive and finely tuned to changing needs. 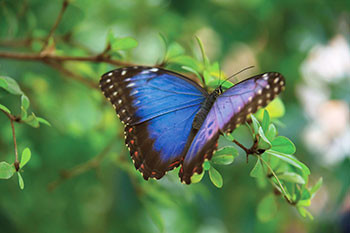 A team of University of Pennsylvania researchers is turning kirigami, a related art form that allows the paper to be cut, into a technique that can be applied equally to structures on those vastly divergent length scales.

In a new study, the researchers lay out the rules for folding and cutting a hexagonal lattice into a wide variety of useful three-dimensional shapes. Because these rules ensure the proportions of the hexagons remain intact after the cuts and folds are made, the rules apply to starting materials of any size. This enables materials to be selected based on their relevance to the ultimate application, whether it is in nanotechnology, architecture or aerospace. Natural selection in an extreme environment has gradually sculpted the giant clam into an exceedingly efficient farmer; it turns the fierce sunlight in its equatorial ocean home into algae, and those single-celled plants into food.

Two Penn researchers are teaming up to unlock the secrets of this living greenhouse and use it as a blueprint for new materials that harvest solar energy or convert it to biofuel. Learn more 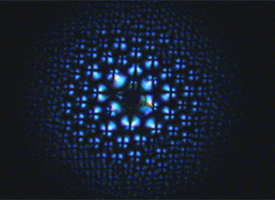 A team of material scientists, chemical engineers and physicists from the University of Pennsylvania has made another advance in their effort to use liquid crystals as a medium for assembling structures.

In their earlier studies, the team produced patterns of “defects,” useful disruptions in the repeating patterns found in liquid crystals, in nanoscale grids and rings. The new study adds a more complex pattern out of an even simpler template: a three-dimensional array in the shape of a flower.

Hanging hundreds of feet off the ground to wash a skyscraper's windows or pumping water out to a desert solar array to keep its panels and mirrors clean is more than just a hassle—it's an expensive problem with serious ecological implications.

Researchers at Penn and the spin off company has found a way to solve the problem of keeping surfaces clean, while also keeping them transparent. 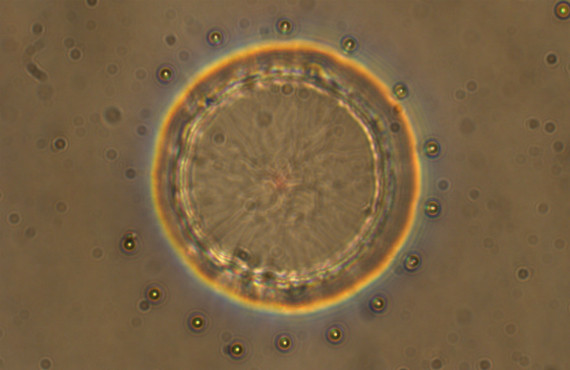 Researchers at Penn Add Another Tool in Their Directed Assembly Toolkit 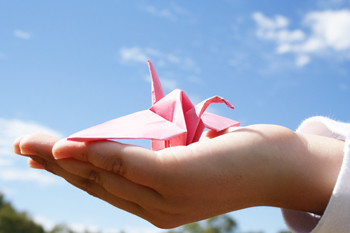 The quintessential piece of origami might be a decorative paper crane, but in the hands of an interdisciplinary Penn research team, it could lead to a drug-delivery device, an emergency shelter, or even a space station.

Led by Randall Kamien, a professor in the Department of Physics and Astronomy, the Penn team will collaborate with researchers at Cornell University on the National Science Foundation’s Emerging Frontiers in Research and Innovation Program called ODISSEI, or Origami Design For The Integration Of Self-assembling Systems For Engineering Innovation.

The project draws inspiration from the Japanese art of paper folding, but the Penn team suggested adding a variant of the technique, known as kirigami, in which the paper can be cut as well as folded. Allowing for cuts and holes in the material makes it easier to fold rigid, three-dimensional structures.

Researchers mimic the colour and texture of butterfly wings. (October 17, 2012)